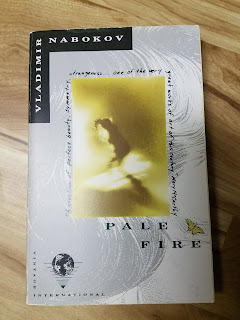 Pale Fire is my favorite novel. If my personal canon could contain only one book, this would be it. This is my 11th time reading it (once sometime before 2002 when I started logging my reading, once in 2007 and once a year since 2011). It is now tied with The Moviegoer, Godric and Til We Have Faces as the book that I’ve read the most as an adult. That being said, I feel at a loss to write about it. Is it a great author thumbing his nose at professional critics? Is it a bored poet making up a maniacal neighbor in order to create a different form of art? Is it a meditation on grief and suicide? Is it a comedy? Is it the story of a king in exile? It could be any or several of those things. I find something new in it each time I read it.

The book consists of two parts. The first is the final poem, Pale Fire, of a famous poet, John Shade, primarily about his relationship with his wife as they deal with the suicide of their only daughter. The other is an introduction to and annotations on the poem by his neighbor, Charles Kinbote, who managed to get the right to edit and annotate it for publication after being present at Shade’s murder. The notations largely express frustration that the poem was about Shade’s daughter. Kimbote believed throughout the poem’s composition that it would be about the exiled king of Kinbote’s home country, Zembla, who escaped imprisonment by revolutionaries and the gradual approach of Shade’s killer. Kinbote believes the murderer was an assassin sent to kill the king. The notes twist the poem into a highly entertaining novel. It is clear early on that the neighbor is suffering from some form of mental illness. Gradually it becomes clear that he believes himself to be that exiled king now teaching at the same school as Shade. The notes only begrudgingly refer to the actual content of the poem and as book progresses, they become more and more detached from the lines, at times using a single word as a launchpad for the next portion of his story.

Kinbote personifies critics who put too much of themselves into a critique of the work at hand. On one level, the last line of Kinbote’s introduction, “To this statement my dear poet would probably not have subscribed, but, for better or worse, it is the commentator who has the final word” is true. But often works get criticized for things they are not even trying to do, and then the criticism might say more about the critic than the work. Pale Fire mocks this mercilessly. Kinbote, though, is an unreliable narrator. He says in the introduction that "without my notes Shade's text simply  has no human reality at all." He tries to build the case that Shade was a dear friend whose attempts at writing an epic of the escape/exile of the Zemblan King were stymied by his wife who had it in for Kinbote. Kinbote's madness shows through, though, and the reader will look past Kinbote's intent and understand how unsettling he was to everyone around him. Shade's poem does have human reality. So two plausible readings of Pale Fire are that authorial intent matters, or that it doesn’t. Here I may be reading myself into the text by saying that more likely he’s making the argument that I would make: authorial intent matters up to a certain point, more than most contemporary critics would admit, but it can only go so far.

On this reread, as I followed Kinbote’s attempt to force his theme into Shade’s work and his stalker behavior, I couldn’t help thinking of the toxic internet fandom of things like Star Wars or the MCU. None of them get to edit and annotate the official release of Endgame, but there is a little bit of Kinbote’s mania and total lack of self awareness there.

Nabokov was famous for not taking strong public political stands beyond a general anti-Lenin and Stalin stance. In Pale Fire, Kinbote says at one point that “art creates its own reality” and that seems to be a fair assessment of Nabokov’s attitude towards his work.  Nabokov had good reason to hate the Soviets. He lived nearly all of his adult life in exile in the wake of the October Revolution. His father was for liberal reform, but was not Bolshevik and so the family had to flee Russia. There are too many layers of fictionalization to imply a one to one relation to Nabokov’s life. It’s hard, though, to read Kinbote’s narrative of a person being driven to madness and suicidal ideation by exile without seeing some parallel.

I still haven’t talked about how funny the novel is. Or how it can work as straightforward escape/crime story. Or how it treats Kinbote’s homosexuality as normal. Or how the poem could stand on its own, even if it would likely not be as revered. Or how there’s a great argument about the existence of God, and if Nabokov has the madman arguing for faith he still has him argue relatively well. Or how Nabokov is one of the best prose stylists ever. Or how it doesn’t excuse Kinbote’s behavior, but it does take his mental illness seriously, and has more pity for him than Nabokov usually does for his characters.

Lolita is Nabokov’s most famous book because of its scandalous subject matter, and it is a great novel. But Pale Fire is his masterpiece and it’s not even close.