Book of Ages: The Life and Opinions of Jane Franklin by Jill Lepore 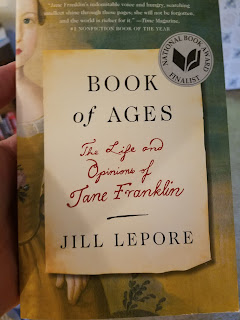 I thought that the first book I read by Jill Lepore, The Story of America: Essays on Origins was, at least in part, a trial run for her one volume narrative history of the US, These Truths. That may still be true, but it could equally be a trial run for this excellent biography of Jane Franklin Mecom, the younger sister of Benjamin Franklin. Many of the essays in Story of America were clearly drawn from the same research. In that book she, in part, makes an argument that writers of narrative histories, especially biographers, tend to overstate what can actually be deciphered from the recorded facts, but that narratives are the way to get people to read history. It is therefore important to both use a narrative, but to do it in such a way that the author is not making up parts of the story wholesale. She particularly takes Washington biographers to task for the recreations of his emotional state that are nearly completely absent from the record. I looked forward, then, to what she would do with the life of Jane Franklin, who is well documented for a woman of her day, but next to the papers left by her famous brother, there is very little.
I really appreciated that in addition to the requisite works cited list, she wrote an epilogue that did a deep dive on her methodology and the way that the records she is using made it through to the archives in which she found them. The major portion of these records consist of her handmade Book of Ages in which she recorded the births and deaths of her children, grandchildren and great-grandchildren and what survives of her correspondence, chiefly with her brother.


What Lepore does with this is brilliant. She holds herself to the same standard as those she’s called to task for their inventions. She doesn’t say that Jane felt something that she couldn’t reasonably deduce from the letters. This is in some ways a biography of Benjamin as well. But rather than allowing his story eclipse hers, Lepore uses them almost as a case study in the opportunities afforded a brother and a sister born into similar circumstances and what they could reasonably make of their lives during that time period. She frames it as a real life version of Virginia Woolf’s thought experiment about Shakespeare’s clever imaginary sister. What emerges is in some ways a critique of the Great Man version of history. But rather than saying that biographies of someone like Benjamin Franklin are useless, she says that they are incomplete. Seeing the lives of the “great” means little without the counterweight of the lives of everyday people. In this case, that particularly refers to the difference between the lives of men and women in the Revolutionary period.

And even in the scant evidence available Jane Franklin’s personality comes through, particularly in the later parts of her life for which a greater number of her letters survived. The book works as both the story of Jill Franklin’s life, a story of Benjamin Franklin’s life that is more complete by the contrast with his sister’s and as a theory of how to think about history in a more well-rounded way. All of this is contained in a narrative that is supported by the evidence and makes, in combination with Lepore’s wit, for an entertaining reading experience.